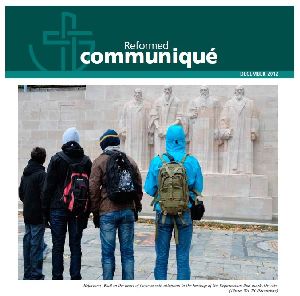 The Executive Committee of the World Communion of Reformed Churches (WCRC) has voted to relocate its offices from Geneva, Switzerland to Hannover, Germany.

"We welcome the move to Hannover which allows WCRC to continue to live out its mission as a Communion of churches. We will remain focused on our mandate of seeking church unity and justice in society and the economy and respect for the environment," WCRC president, Jerry Pillay said on 5 November in announcing the decision.

Why Geneva of all places?

In this article I want to focus on the question of why the World Communion of Reformed Churches (WCRC) has its offices in Geneva. It starts with the decision taken in 1937 to form the World Council of Churches (WCC) and establish its offices in Geneva. In 1938, the Secretary of the World Student Christian Federation, Willem Visser 't Hooft, a Reformed theologian from the Netherlands, was appointed as WCC's General Secretary although the organisation, because of the war, only came into full existence at its founding assembly in Amsterdam in 1948.

Theologians, anti-poverty advocates and economists have issued a statement naming overconsumption and greed as key factors to be addressed in seeking a more just distribution of the world's resources. Social inclusion, gender justice, care for the environment, and concrete actions to overcome greed are named as criteria for a new economic and financial architecture.

Partnership Fund – Out of Africa… into Malta

Walter and Lillian Donmilic are Christians who fled Nigeria when Islamist militants burned churches and homes. A crowded truck journey across the Sahara took all their savings; several times, the drivers stopped and demanded more money to finish the journey. Early last year, they reached Libya – and found themselves in the middle of a full-blown war. With thousands of other Africans, they desperately sought escape to Europe.

The first two women pastors in Mexico have been ordained to mark the launch of a new communion of churches in the country. The ordination took place 28 October during celebration of the creation of the Mexican Communion of Reformed and Presbyterian Churches (CMIRP).

An association of feminist Korean theologians has been selected to receive an international prize awarded by women of the Swiss Reformed Churches to organizations or individuals who promote the role of women as church leaders.

The young lady, Mary, must have felt overwhelmed by this particular visit – a strange visitor with a strange message that announced she was to become the mother of a special baby – the Son of the Most High. I like the gift of young people to be straight forward. And so Mary dared to ask, "How can this be?" In return, she received a clear answer, "... nothing will be impossible with God". Mary's response was remarkable.