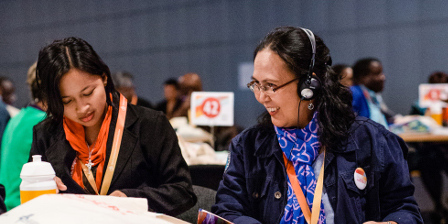 The “Declaration of Faith on the Ordination of Women” was accepted by the World Communion of Reformed Churches (WCRC) at its General Council on Monday, 3 July, in Leipzig.

“We have reached a certain consensus,” exclaimed Jerry Pillay, president of the WCRC. At the decision-making session on gender justice delegates accepted the “Declaration of Faith on the Ordination of Women.”

Prior to this, important group discussions were conducted through the Council’s discernment process. “The proposals on the ordination of women and on the creation of a gender policy and its implementation have received very strong support from the delegates,” said Lisa Vander Wal, a member of the WCRC Executive Committee, who presented a summation of the discernment groups’ comments.

“I am pleased to be able to adopt this statement. I was already present at the Uniting General Council in Grands Rapids in 2010, and it was on this occasion that we decided to really promote the ordination of women,” said Stephen Kendall of the Presbyterian Church of Canada.

However, some members of the audience raised their blue consensus cards, indicating that they were not completely in favor of this proposal. “We take note of your disagreement,” said the president, adding that delegates who did not support the declaration could express their dissension to be included in the Minutes.

The approval of this declaration constitutes an additional step in the establishment of equality between women and men within the WCRC. But “gender justice is not limited to the ordination of women,” stressed Chris Ferguson, WCRC general secretary, during the presentation of his report. The way is open for further work on gender equality with the WCRC committing to engage in a process to accompany its member churches.