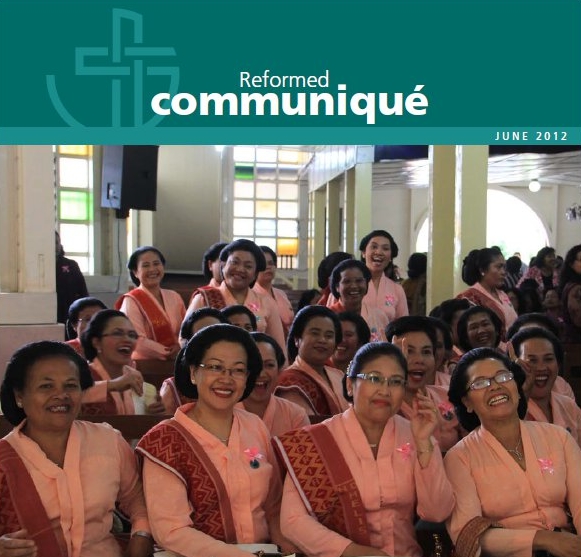 Reformed Communiqué is published quarterly by the World Communion of Reformed Churches (WCRC), a fellowship of 80 million Reformed Christians in 230 churches in 108 countries. Editor: Kristine Greenaway

Theological formation, economic justice and measures to address financial concerns will be the focus for the World Communion of Reformed Churches (WCRC) in 2012-2013. Members of the organization's Executive Committee endorsed the plans at the conclusion of a six-day meeting in Berastagi, Indonesia in May. Much of the committee's discussion focused on financial issues.

"We leave this meeting knowing what lies ahead of us in the coming months. The way will not be easy but we are committed to building a secure financial future for WCRC which will enable us to live out our vision and purpose as we engage God's mission in the world," said WCRC President, Jerry Pillay.

The question of how churches in Indonesia can work together in response to social, community and environmental concerns is the subject of discussion in this country where Christians form ten per cent of the population and Muslims make up 86 per cent.

The Executive Committee of the World Communion of Reformed Churches (WCRC) has named a new general treasurer. Johann Weusmann of the Evangelical Reformed Church in Germany was appointed Saturday, 12 May during meeting in Berastagi, Indonesia.

Buhle Mpofu's commitment to working with churches in response to the HIV and AIDS pandemic has prepared him well for his new role as Regional Secretary for the African region of the World Communion of Reformed Churches. Mpofu coordinates a mission programme that equips congregations of the Uniting Presbyterian Church in Southern Africa to respond to the challenges of the HIV and AIDS pandemic.

Silvia Adoue Renfer may be one of the ecumenical movement's best-kept secrets. For the past 21 years, as executive secretary of a Swiss foundation that supports Reformed church projects, she has kept a low profile, consistent with the discretion of the benevolent foundation whose activities she coordinates.

Partnership Fund: The wheels on the bus go round once more

In 2011, the Partnership Fund helped the Presbyterian-Reformed Church of Cuba to replace the engine in a minibus. Two decades earlier, it helped to buy the bus.

9 "There is a boy here who has five barley loaves and two fish. But what are they among so many people?" 10 Jesus said, "Make the people sit down." Now there was a great deal of grass in the place; so they sat down, about five thousand in all. 11 Then Jesus took the loaves, and when he had given thanks, he distributed them to those who were seated; so also the fish, as much as they wanted. 12 When they were satisfied, he told his disciples, "Gather up the fragments left over, so that nothing may be lost." 13 So they gathered them up, and from the fragments of the five barley loaves, left by those who had eaten, they filled twelve baskets. (John 6: 9 – 13)

Concern about the global economy and the resources available to the World Communion of Reformed Churches (WCRC) and other ecumenical bodies has been very evident in recent years. And so it should be, because these are not easy times.