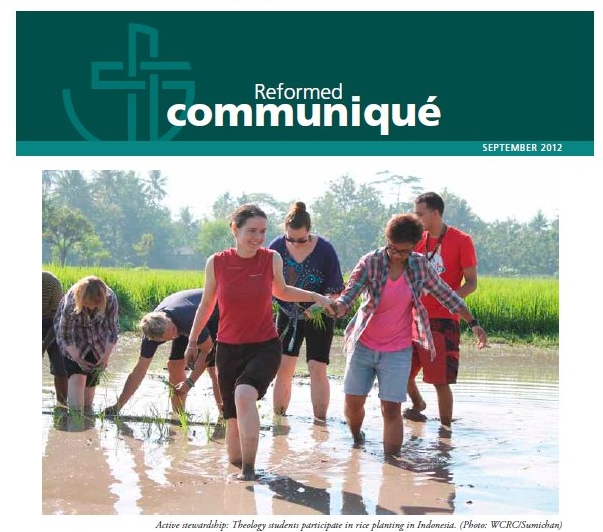 Active stewardship: Theology students participate in rice planting in Indonesia. (Photo: WCRC/Sumichan)
Conference on global economy will meet in Brazil - In Lebanon can two walk together if they do not agree? - Pieter Holtrop: Dutch theologian mourned - Omega Bula, an architect of the Accra Confession, retires

When fifty theology students from around the world spend four weeks studying and living together, the learning process quickly becomes intensive and all-involving. The head of the theology office for the World Communion of Reformed Churches (WCRC) knows this from first-hand experience.

Douwe Visser directed the Global Institute of Theology (GIT) in Indonesia in June that gathered students and faculty from twenty-two countries for an intensive programme of theological study and field visits at Duta Wacana Christian University in Yogyakarta.

Conference on global economy will meet in Brazil

An ecumenical conference to propose a new international financial and economic architecture will take place at the end of September amid growing concerns about the impact of the economic and financial crisis on humanity and the Earth.

Partnership Fund – In Lebanon can two walk together if they do not agree?

Lebanon has provided a timely case study for an international congress of French-speaking practical theologians on the theme of living together – a challenge for many societies today and also for theology.

It is with a sense of sadness that we learned in August of the death of our colleague and friend, Pieter Holtrop. Holtrop was an outstanding professor who gave freely of his tremendous gifts to the Reformed family worldwide. From 1989 he served as a member of the Executive Committee of the former World Alliance of Reformed Churches (WARC).

Omega Bula, an architect of the Accra Confession, retires

Omega Bula is one of the architects of the Accra Confession. The declaration that condemns systems of economic exploitation of the poor as "sin" is at the heart of the justice and theology programmes of the World Communion of Reformed Churches (WCRC). It is also at the heart of Bula's work in global ecumenical partnerships with The United Church of Canada.

One of those days Jesus went out to a mountainside to pray, and spent the night praying to God. (Luke 6: 12)
Watch and pray so that you will not fall into temptation. (Matthew 26: 41)

"Come, let us pray!" This is an invitation that I wish Reformed Christians would give one another more often. Unfortunately, in this twenty-first century it is more common to receive an invitation to enjoy a meal together or a game or some other fun activity than to enjoy praying together.