Coming together at that time will be the World Alliance of Reformed Churches (WARC) and the Reformed Ecumenical Council (REC), both of which have worked for several years to unite the two ecumenical organisations.

"The highlight of the Uniting General Council (UGC) meeting will be the connecting of the 1,000 delegates and visitors with local congregations and we will do everything we can to make that happen," says the Rev Peter Borgdorff, president of the Reformed Ecumenical Council, which is based in .

He is also chair of the North American Arrangements Committee for the 2010 gathering. "Direct communication with congregations in hosting denominations will follow."

The website is intended to provide complete information on all activities related to the meeting in 2010. "It will also be the place to volunteer, contribute, announce schedules and update as we enter the implementation phase of plans 15 months from now," says Borgdorff.

Entitled 'Unity of the Spirit in the Bond of Peace', the 2010 gathering will formalize the merger as well as address a range of issues, including Reformed identity, theology and communion, Christian community and ecumenical engagement, justice in the economy and on earth, worship and spiritual renewal, leadership development, gender justice, and empowerment of youth.

More than 1,000 delegates, guests, visitors, volunteers and staff will gather for this event. Women and young people will hold additional events just prior to the meeting of the Uniting General Council. This historic gathering also promises inspiring worship, community Bible study, testimonies from churches across the globe, a look at contemporary Reformed theology, and a review of various mission experiences worldwide. In addition, the new organization will make a firm commitment to justice for all people around the world.

"The WCRC has invited the Christian Reformed Church (CRC) to serve as the official host (in cooperation with other WARC-member denominations in ) for this world gathering," says Borgdorff, executive director emeritus of the CRC.

He adds: "The hope and intention of the WCRC is to link each of its delegates with a local, congregational expression of Reformed faith and practice, mostly within the region.”

Cliff Kirkpatrick, WARC president, welcomes this initiative to call attention to the Uniting General Council. “The launch of the WCRC will be a very significant witness to the reconciliation we find in Christ,” he says. “By merging into a worldwide communion, Reformed churches are setting an example of the strength to be found in common action at a time when the world so needs positive models in seeking how to respond to the multiple challenges which daily confront individuals and institutions.” 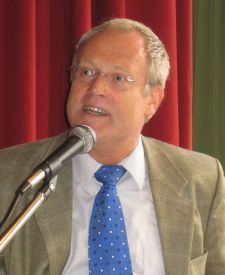