John Dorhauer, general minister and president of the United Church of Christ: I wonder why the richest nation on earth is being asked to hate and fear. 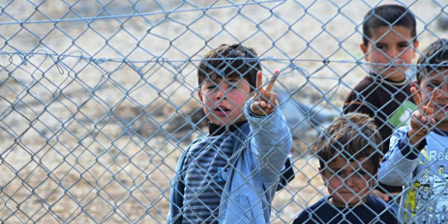 Foto: WCRC
The WCRC joins with its member churches to oppose the recent Executive Order issued by President Trump and calls for members of the Communion to join in prayer and action.

A call to prayer and action for refugees

Is not this the fast that I choose: to loose the bonds of injustice, to undo the thongs of the yoke, to let the oppressed go free, and to break every yoke?
Is it not to share your bread with the hungry, and bring the homeless poor into your house; when you see the naked, to cover them, and not to hide yourself from your own kin? —Isaiah 58:6-7

Last Friday evening, 27 January, United States President Donald Trump issued an executive order on immigration which indefinitely barred Syrian refugees from entering the U.S., suspended all refugee admissions for 120 days, limited the total number of refugees admitted to 50,000 for 2017 and blocked citizens of seven Muslim-majority countries from entering for 90 days.

Member churches of the World Communion of Reformed Churches have responded to this executive order, which has since been stayed by a U.S. Federal judge.

J. Herbert Nelson II, stated clerk for the Presbyterian Church (USA), has said that the
executive order functions to further harm
the people “who are the very victims of terrorism, genocide, religious and gender-based persecution, and civil war.”

Russell Barr, moderator of the Church of Scotland, said, “History is littered with instances in which human distrust, xenophobia, and discrimination has sown hatred and conflict; our own desire for self-preservation taken at the exclusion of others. And yet throughout history the Bible has called Christians to live beyond hatred and fear, demonstrating a radical hospitality where the stranger finds welcome and refuge is provided for those who are oppressed.”

John Dorhauer, general minister and president of the United Church of Christ, wrote an essay calling to “remember the people behind the policies” in which he said, “I wonder why the richest nation on earth is being asked to hate and fear.”

World Renew, the relief organization serving the Christian Reformed Church in North America and the Reformed Church in America, “understands that citizenship in the kingdom of God obligates us to the highest law: love for God and for our neighbours. Exercising this love should lead us to advocate for laws that will mandate the just and humane treatment of immigrant peoples; indeed, love for the immigrant should lead us to expand and not retract our refugee resettlement programs.”

In addition, hundreds of sisters and brothers from member churches have signed an interfaith, public letter supporting refugee resettlement.

Meeting in Lebanon in 2015, the WCRC Executive Committee issued a statement calling on our member churches, among other items, to:

We again renew this call and urge our members to:

We also call for prayers for those directly impacted by this executive order—for those families that remain forcibly separated, for those whose lives were abruptly disrupted, for those demonstrating for justice and for those working to assist these victims of violence and injustices.